Well, The Seven Wonders of the Ancient World are about Hanging Gardens of Babylon, Temple of Artemis, Statue of Zeus at Olympia, Mausoleum at Halicarnassus, The Colossus of Rhodes, Lighthouse of Alexandria and Great Pyramid of Giza (sometimes it is also called Pyramid of Khufu). by this time let us know about Great Pyramid of Giza as well. 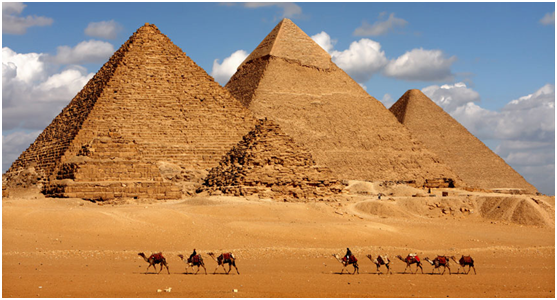 It was built in 2580 BC and completed in 2560 BC. One is located in the center of the group of pyramids of Giza, is also the tallest, known as “one of the eight wonders of the ancient world”. among the 110 pyramids that have been discovered in Egypt, the pyramids of the three generations of Giza Plateau – the Khufu Pyramid, the Khafre Pyramid and the Menkaure Pyramid – are the oldest. The pyramid, shaped like a triangle, is a stone structure with a square base and a spire. It is the tomb of an ancient Egyptian king, queen, or other members of the Royal family. It is a large-scale, isosceles triangle from all sides, very similar to the Chinese word “金” (Gold), so it is vividly translated into the Chinese word “金字塔” (Pronounce as Jinzita). Certainly, it was not built by gold, but it is also not like shape of tower.

Why Built the Pyramid

At that time the Nile flooded every year and flooded the fields for 3-4 months. The farmers and laborers could not cultivate land, so they found the work of building the tomb. It may take 30 years to build a project in Pyramid. The pyramids were built on the west side of the Nile because of the Egyptian view of life and death and the belief in the sun god that the sun rises from the East and sets from the west every day, as if it were born in the East and died in the West. Ancient Egyptians believed that after death, the soul remained immortal, and that if the corpse was preserved, 300 years later, eternal life would be revived in the world of bliss, so they attached great importance to the construction of mausoleums.