Rome, so many good scenic spots there, meanwhile there are a lot of great ancient building erecting on the place where the tourist dream to travel. Well, Colosseum is one of the mot famous ancient building. Certainly, now it is only as relics to show to the world because of not complete wall of building. Despite, it also embodies wisdom of ancient Roman and it is also the symbol of ancient Rome civilization, built in 72-80. The site is located in the centre of Rome, the capital of Italy, south of Piazza Venezia, near the ancient Roman market.click

Colosseum, In Italian as Colosseo, click formerly known as Amphitheatrum Flavium, was a place where slave owners, nobles and free people could watch the fighting or slave fighting in the ancient Roman Empire. As basic information and data about Colosseum, in appearance, it is a circular shape; when it looks down, it is oval. It covers an area of about 20,000 square meters. Its long axis is about 188 meters, its short axis is about 156 meters, its circumference is about 527 meters, and its wall is about 57 meters high. This huge building can accommodate nearly 90,000 spectators. 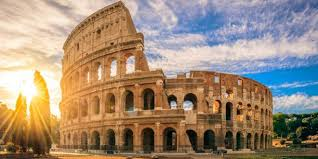 The grandstand of the Colosseum consists of three layers of concrete cylindrical arches with 80 arches in each layer, forming three circles of circular corridors of different heights. click Inaugurated in AD 80, the 50,000-seat Colosseum, featured for its construction as the top is a 50 meter high solid wall, and the stands will gradually retreat to form a stepped slope. The emperor Vespasian (R AD 69–79) originally commissioned the amphitheatre in AD 72 in the grounds of Nero’s vast Domus Aurea complex. But he never lived to see it finished and it was completed by his son and successor Titus (R 79–81) a year after his death. Titus held a game lasting 100 days and nights, of which about 5000 animals were slaughtered, exactly for its inauguration. Trajan (R 98-117) raised it and held a 117-day marathon for carnival of killing, including 9,000 gladiators and 10,000 animals.C