There are two main factors in the formation and development of a nation’s food culture. One is the local geographical factor and the other is the multi-dimensional human factor. For the United States, the multiplicity of human factors has a more critical impact than the local geopolitical factors.

As the saying goes, “Hunger breeds discontent”, of course, the United States is no exception. The United States is a multi-ethnic immigrant country that combines cultures of different races and ethnic groups from all over the world. Naturally, American food is also integrated into various food cultures and characteristics. Although the American food culture has various characteristics, the Americans themselves later created their own eating styles. Its main features are greasy, cheese and almost all cooking methods. As Pollan mentions, America is a melting pot of many different cultures, each one bringing their own culinary traditions. New York City, where I grew up, is the epitome of this culinary melting pot. You can find almost any food from any culture if you look hard enough, from Polish bakeries, to Chinese restaurants, to burrito food trucks. You can even find fusions of these culinary traditions in restaurants, for example, a Spanish inspired sushi restaurant featuring yellowtail tacos. New York City has also latched on to the local movement. Farmers’ markets are popping up in many (upper-middle class) neighborhoods. Farm-to-Table restaurants are all the rage, showcasing produce, meat, and dairy from nearby farms. New York City is not unique in this regard—many other cities across America both have a huge variety of cultural cuisines and also promote local food. 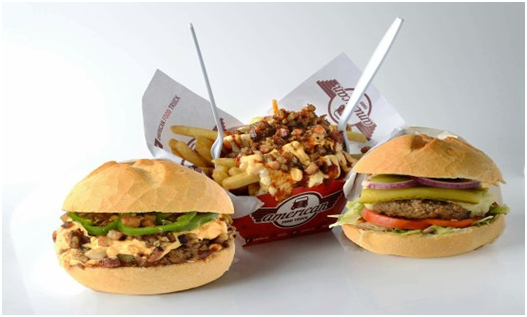 For many Americans, however, both inside and outside these cities, this food culture is out of reach. Schlosser writes that a meal of a hamburger and French fries from a fast food chain is the “quintessential American meal.” He also says that fast food, along with pop music and jeans, is one of America’s biggest “cultural exports.” This is unfortunate and true. Other countries bring their food traditions to America and they are celebrated, studied and eagerly adopted. Americans bring our food to other countries and it is seen as less sophisticated and less delicious. McDonald’s is now all over the world. This is of course an impressive feat for a company, but the food it sells is not should not make American’s proud.

In fact, Americans pay attention to nutrition, not taste, and Americans generally don’t cook. In the urban and rural areas of the United States, coffee shops, McDonald’s fast food restaurants abound are everywhere. Go to the coffee shop, drink a cup of coffee for more than one dollar, eat a plate of ice cream for two or three dollars, and talk while eating, is a very comfortable thing.